A number of local government units called off classes for Tuesday, March 19, 2019 as their areas brace for Tropical Depression Chedeng.
The state weather bureau said Chedeng may make landfall over the eastern coast of Davao Oriental on Tuesday morning and is expected to weaken into a low pressure area while crossing Mindanao.
It also advised the public of scattered to at times widespread moderate to heavy rains on Tuesday over some parts of Davao, Soccsksargen, Bangsamoro and Zamboanga Peninsula.
Here is a llve list of areas where classes have been suspended for Tuesday, March 19, due to Tropical Depression Chedeng.

Please refresh this page to get latest update.

According to the automatic class suspension guideline by DepEd, LGUs have the authority to declare local suspensions in areas where there is no storm signal.

When there is a storm signal in a particular area as declared by PAGASA, classes are automatically suspended. However, in cases where there is no storm signal, but a calamity is present; the local government unit (LGU) and not DepEd would decide and announce the class suspensions. 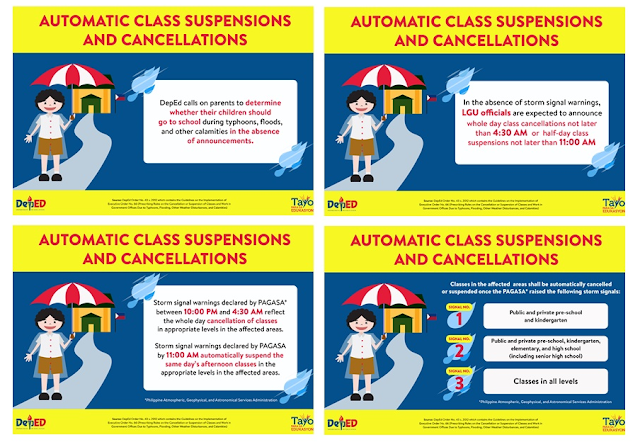 Classes are suspended, March 9, 2020, in some areas after the Department of Health confirmed… Read More »#WalangPasok: Class suspensions for Tuesday, March 10, 2020

Class suspensions due to coronavirus

Classes are suspended, March 9, 2020, in a few cities and schools after the Department… Read More »Class suspensions due to coronavirus